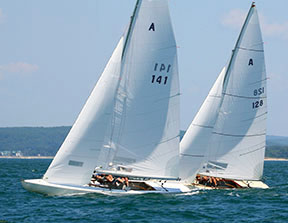 Starting on Thursday, 21 boats came to the line for two races in mostly light air. Scott Reichhelm in A142 Shucks emerged on top for the day with a second and third place, followed by Chris Wittstock, then Steve Benjamin. The second day, again conditions were light and tricky until a breeze arrived late in the day. Norm Peck III in A137 Nonesuch from the home club showed great consistency to take the overall lead by one point from Benj. Jeff Shay and Scott Reichhelm shared third spot.

Day 3: An excellent day's racing in a 15-knot westerly breeze and flat water. In a popular move, the Race Committee, led by Ken Legler, laid courses with more, shorter legs, to keep the fleet out of the strongest part of the tide.

Five boats went into the last race with a chance of winning the title, and the result couldn't have been closer. Bill Barton repeated his 2013 win in A141 One 4 All with his crew of Peter Smith, Peter Duncan and Tom Blackwell. Steve Benjamin in A128 Cassidy needed to win the last race but keep a boat between himself and Barton: the latter finished second to clinch the title when the tie was resolved. Third was Stephen Jay in A148 Alliance, fourth Norm Peck III.